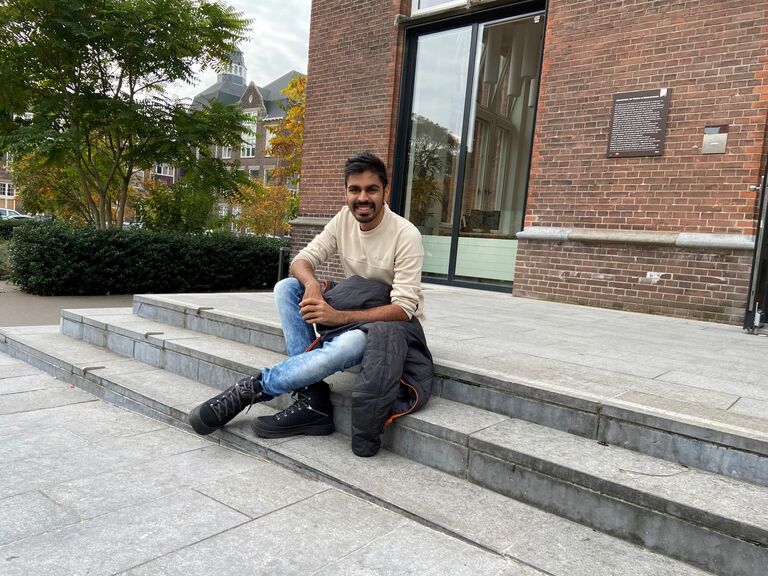 As Resident Assistant, Sid Jain has had the perfect part-time job for a year-and-a-half now

It all started with a few videos that he made for DUWO shortly after his arrival from India. But, soon thereafter, building and architecture student Siddarth Jain became a Resident Assistant in a student complex in Delft – and also in a second. He really enjoys this side job and, solely due to his enthusiasm, puts much more time into it than is expected, as he related to me in a conversation.

Siddarth (Sid) has been in the Netherlands for a year-<s class="msoDel"> </s>and<s class="msoDel"> </s>-a-<s class="msoDel"> </s>half and is currently studying at the Delft University of Technology. He lived one year in the large new complex on the Prof. Schermerhornstraat in Delft, which residents call the “Prof-S”. He had already set his sights on that complex when he was still at home in India, as international students can view and select already available residences in advance since this past year. Even though that sometimes required a bit of patience. ‘The Prof-S is enormously popular among internationals’, Siddarth noted. ‘In Mumbai, I even spent an entire day at my laptop to makes sure I could reserve here. And I was so happy when I finally secured a spot.’

Siddarth is a member of the Indian Students Association (ISA)<s class="msoDel">,</s> which,<s class="msoDel"> —</s> together with other associations for international students in Delft,<s class="msoDel"> —</s> has its offices in a building right next to the Prof. Schermerhornstraat. After arriving in Delft, Siddarth made (at his own initiative) four videos about complexes for internationals, which was intended to show students abroad what the residences and the complexes look like. That’s how he came to work as a Resident Assistant (RA), which is especially nice to do in addition to his study programme.

Initially, Siddarth was the RA in the complex at the Prof. Schermerhornstraat, where he lived. Currently he lives on Arubastraat, also in Delft, and he is also an RA there. These are two very different complexes, also as it concerns the work that an RA does. ‘At the Prof-S, I always had to discuss things with everyone’, Sid explained. ‘The complex is very large (more than 300 residences, Ed.). As a result, I had to put quite a lot of time into the job. And often practical jokes were played there. Many crazy things occurred –<s class="msoDel">—</s> situations where you had to intervene. I remember the one time that everyone suddenly started throwing tomatoes. They threw them from the ground towards the fourth floor or from balcony to balcony. Why? No idea. Maybe they were drunk. But the ground was full of tomato pulp. And then you try to talk to the residents. I was able to persuade them such that they cleaned up the whole mess nice and neatly. There are a lot of different nationalities living at the Prof-S, some 50 of them. And it’s a mix of student levels: masters, bachelors. Of course, this means that things will happen and that you often have to address people about their behaviour.’

The complex on Arubastraat,<s class="msoDel"> —</s> a renovated nursing home from the 1960s, now with 60 students' residences,<s class="msoDel"> —</s> is a completely different kettle of fish for an RA. As Siddarth explains, ‘It’s an old building. That means that repairs must often be made, which I tend to. And I know that sometimes it can take some time before something is fixed. But, thankfully, I have very good communication with the property manager. Via WhatsApp, very ideal. Recently I was even apping with the property manager at 2 o’clock in the morning. The fire alarm had sounded, but nothing was wrong; it happened accidentally. But, okay, you do have to contact DUWO. All in all, I spend maybe one hour a week here on RA work.’

‘In general, you act as a bridge between the residents and DUWO’, Sid said about his part-time job. ‘If something goes wrong, you make sure that you help to solve a problem more quickly. For that, we mainly use various app groups. This way, you reach up to 90 per cent of the residents. The blocks each have their own app group and they also forward messages to each other, so if something goes wrong, the message makes the rounds very quickly.’

Siddarth finds the best part of his work as an RA to be the many contacts he has collected. ‘You get to know many people, you talk with a large number of people, so you quickly build an extensive network. And especially because I am so enthusiastic about this work, I even put more time into it than is required. For example, if help is needed at DUWO for the organisation of things or for documents and such, I like to pitch in because I just really enjoy it.’

The most important characteristic for being a good RA can also be found in the motivation, Sid feels. ‘Especially being open to others and enjoying talking with people. And having a lot of enthusiasm, of course.’

Being enthusiastic yourself about living at DUWO may also help. Because Sid is certainly enthusiastic. ‘That’s true’, he said, ‘because it is so much easier than living somewhere else. I know many students who have left a DUWO residence and now live somewhere else. They all say the same thing: “What a hassle now that I’m no longer renting from DUWO. I have to follow up on everything myself: pay the gas and water bills myself, do repairs myself. With DUWO, it was a lot easier.” That’s why I’m also happy that I still live here.’

And the Netherlands? That, too, is a successful match as far as Siddarth is concerned. He’s really enjoying being here and he understands Dutch by now. ‘Here in Delft, it is so much quieter than it is in India. Mumbai is really a gigantic, busy city with I-don’t-know-how-many cars, but many more bicycles. But the traffic is also incredibly busy even outside Mumbai, in the countryside. The Netherlands may be a cycling country, but in India there is really a crazy number of bikes. And, no, I have no problems with the weather here. I don’t feel very cold or something like that. However, I wouldn’t mind if the sun shined more often.’

Due to a technical malfunction, it is currently not possible to move or to vote in a candidate. A solution is being worked on. We're sorry for the inconvenience.