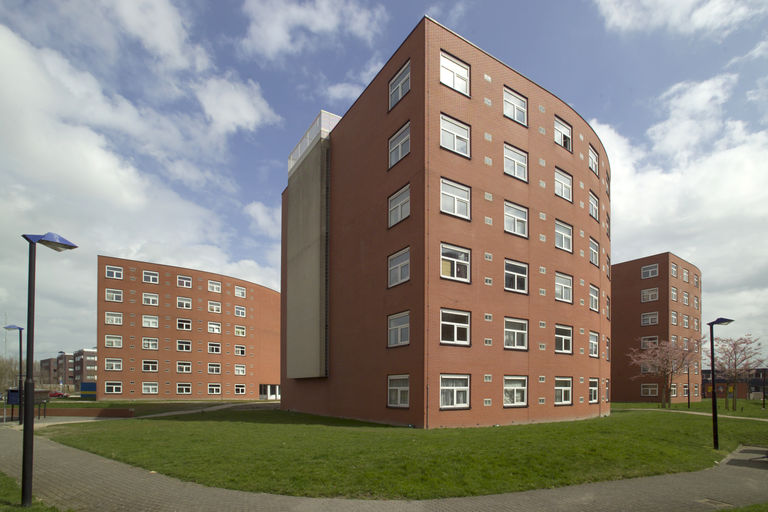 Part of the Opaal Campus in Hoofddorp has been renovated and made into self-contained studios that meet the requirements of today’s tenants.

The alterations and renovations were carried out in Toren 7. Not only has the shared accommodation in the complex been converted into 62 self-contained studios, but the building interior has been renovated and made lighter and more spacious. A sustainable energy supply system has also been installed.

Grounds
The Opaal Campus was built between 1994 and 1996 as accommodation for students attending the Hoofddorp School of Aviation as it was then. Today, it accommodates students from the MBO College Airport in Hoofddorp, as well as students from ROC Amsterdam, for example. DUWO acquired the complex in 2005 when it merged with the Intermezzo student housing association. There was little social cohesion in the Opaal Campus, although this changed substantially when the grounds were given a facelift and a common room was created for the residents. And more recently, Toren 7 has been converted and renovated. Solar panels and hot water collector panels have been installed on the roof and the rooms now have CO2 controlled ventilation. This has resulted in the complex now having energy index B classification.

The 62 self-contained studios have been rented out since mid-July. The residents comprise of the previous tenants, who were given temporary accommodation elsewhere during the renovations, and new tenants. Rentals are between €310.25 and €316.84, including service charges, TV, internet, and after the deduction of the rental allowance from 18 years of age.

One complete corridor in the building is rented to the ROC Amsterdam aviation college. Accommodation has also been rented to the Gerrit Rietveld Academie.

You can see what it used to be like, and how it is now in this video.