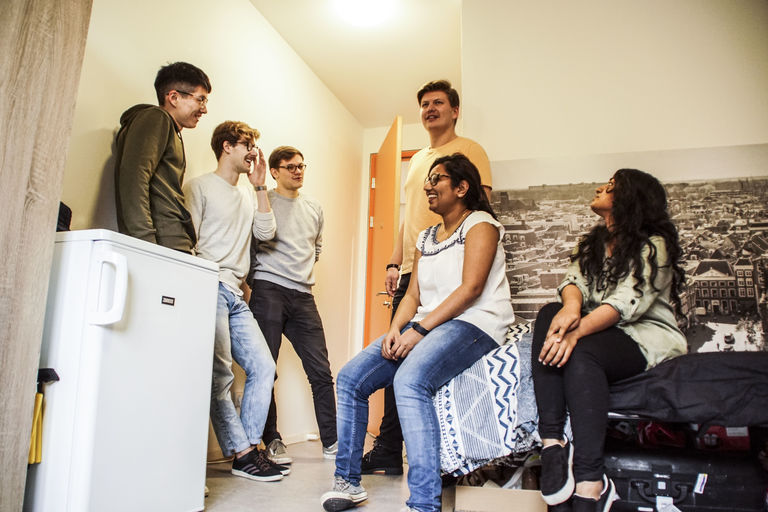 There is great demand for warm socks and sweaters at the 23 student flats that are participating in the Student Energy Race this winter. And not without results: since the start of the energy saving contest in November, an average of 41% was saved in energy. The student flat that is currently in first place, Koninginnelaan 201 in Nijmegen, has even already saved as much as 72%.

Right now, 189 students in seven cities are keeping a close eye on their energy consumption. The central heating is turned down a notch, energy-guzzling devices are unplugged, and students are competing to see who can take the fastest shower. For the die-hards among the participants, a cold shower is also a good option. The participants are trying to save energy in every possible way. That is good for their own wallet as well as for the environment. Of course, the latter is the main reason for this contest, which is being held for the seventh time. For the students, however, saving some money is a great side-effect.

Not a run race

The current rankings are looking promising. In particular, the flats in Nijmegen and Utrecht are scoring well. The monthly first prize was awarded to Koninginnelaan 201 (66% savings), and second prize went to Stijn Buysstraat 25 (65% savings). But this is not a run race. Anything can change in a few cold weeks. That's what keeps the contest exciting.

The winner of the Student Energy Race is the student flat that has saved the most energy in percentages after four months. This final winner will receive the grand prize (a trip of their choice for the winning flat). However, the flats are also competing for monthly prizes and the prize for the smallest primary ecological "footprint". This is determined by translating the consumption of gas and electricity into CO2 emissions and then dividing that by the surface area of the flat. Koninginnelaan 203 in Nijmegen is currently in first place with 59 kg of CO2 per tenant.

Five student housing organisations are participating in the contest. De Key, DUWO, SSH, SSH& and Idealis. The 23 participating student flats are located in Amsterdam, Delft, Leiden, Nijmegen, Utrecht and Wageningen. Studenten voor Morgen [Students for Tomorrow], a network organisation that is committed to sustainability in higher education, oversees the contest.

The participating flats take part in workshops and receive an energy saving box at the beginning of the race. This box contains things like LED lamps, radiator foil, draft strips, a shower timer, a refrigerator thermometer, and a smart energy meter that can be used to find out how much energy an electrical device consumes when it is turned on. Tenants can continuously monitor their own energy saving behaviour and that of their opponents via an app.

The contest has already proven its value over the years. For example, it turns out that the majority of the flats that were part of the Student Energy Race continued to consume much less energy in the years that followed their participation.

On 14 March 2019, the winner of this year's edition will be announced.

The race and the participants can be followed on the Facebook page of the Student Energy Race as well as via Instagram.